Egypt is one of the world’s earliest urban and literate societies; thus, it is considered as one of the most ancient civilizations on Earth. Egypt, by all means, is rich in history, and that it is not surprising that there were over 2,000 deities in the Egyptian Pantheon.

Let us take a look at 16 gods and goddess whom Ancient Egyptians served:

Ancient Egyptian considered Ra, the Egyptian sun god the ruler of everything. He is portrayed as a man with a falcon head; in other words, a man with a sun disk on his head. He was primarily associated with the city of the sun or Heliopolis.

Although initially he was only associated with the mid-day sun, as time passed, Ra became connected to the presence of sun all day long. 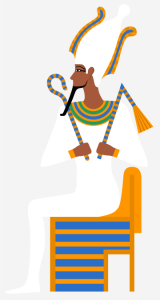 One of Egypt’s most important deities- Osiris, was the god of the underworld. He symbolized death, resurrection, and the cycle of Nile floods. The same river that the ancient Egyptians relied on, for agricultural fertility.

Osiris was the king of Egypt, who was murdered by his brother Seth and his wife, Isis. They reassembled his body and resurrected him, allowing them to conceive a son, the god Horus.

Different forms of Horus are recorded in history. Horus is the first national god, related to the ruling pharaoh who in time came to be regarded as a manifestation of Horus in life and Osiris in death.

Horus was a sky god associated with war and hunting. He was described as a falcon or as a man with a falcon’s head.

Horus was the magically conceived son of Isis and Osiris and was raised to avenge his father’s murder. As the story continues, Horus lost his left eye fighting with Seth. The god of Thot magically healed his eye. Based on the mythology, his right and left eyes were associated, with the sun and the moon. Hence, the loss and restoration of his left eye explained the phases of the moon according to the myth.

Isis, unlike many gods, can’t be tied to a specific town, and there are no particular mentions of her in the ancient Egyptian literature. But with the time, she grew in importance and became one of the most important deities in the Pantheon as the devoted wife of Osiris who resurrected him and raised their son. She embodied the traditional Egyptian virtues of a mother and wife.

Seth, the god of chaos, violence, deserts, and storms, is the murderer of Osiris. He is often portrayed as an animal or as a human with the head of an animal. Though, the name of the animal is not known. In his entirely animal form, he has a thin doglike body and a straight tail with a tuft on end. A lot of people now believe that Seth is some mythical creature.

Anubis depicted as a jackal-headed man, the son of Seth whose cult center was Cynopolis, now known as El Kes. He was very closely associated with mummification and as a protector of the dead. It was Anubis who conducted the deceased to the hall of judgment.

Geb was considered as the god of Earth. According to myths, the sun once hatched from the eggs of Geb. His associations with geese also (his sacred animal) earned him the name- Great Cackler. He was portrayed as bearded with a goose on his head. Geb’s laughter was thought to cause earthquakes.

Geb married his sister Nut, the goddess of the sky. Seth and Nephthys were the children of Geb and Nut. Geb is shown witnessing the weighing of the human heart during the judgment of the dead in the afterlife.

Nephthys (Nebt-het), the daughter of Geb and Nut, sister of Osiris, Isis, and Set, wife of Set, mother of Anubis was the head of the household of the gods.

She was portrayed as a falcon or a lady with the falcon wings. She was also considered as the goddess of death.

Nut, the wife of Geb and the mother of Osiris, Isis, Seth, and Nephthys, was the sky goddess and was picturized supporting the sky with her back. She was supposed to have a blue body completely covered with stars.

Shu was considered to be the god of air and sky who mated with her sister Tefnut to conceive Nut and Geb. He is responsible for holding the sky separate from the Earth.

Shu was pictured as a man with an Ostrich feather.

Tefnut, the goddess of fertility, was also known as the goddess of moisture or water. She was the wife of Shu and the mother of Geb and Nut. She was considered to help Shu hold up the sky sometimes.

Bastet was portrayed as a woman with a cat’s head or only as a cat. She evolved into a goddess of pleasure.

She was associated with the town of Bubastis in the Western delta. A lot of cats who lived at her temple were mummified when they died. Recently, a large cemetery of mummified cats is found in that area.

Bes was represented with a full face rather than in profile, unlike any other gods. He was a dwarf with his tongue sticking out and had a bandy-leg.

He was generally assigned with good times and entertainment but was also considered a guardian god of childbirth. Bes also protected people from demons of the night and dangerous animals.

Hathor, the daughter of Ra (the sun god), was the goddess of women, beauty, love, pleasure, and music. She was portrayed in three forms; a cow, a woman with the ears of a cow, and a woman wearing the headdress of a cow’s horns. She was also considered as the cow- goddess and was a personification of the Milky Way.

It was believed that she protected women during childbirth, and she also had a crucial funerary aspect, being called ‘the lady of the west.’ According to the myth, she would welcome the setting sun every night, and the ancient people hoped to be welcomed into the afterlife in the same way.

Taweret- a demon turned goddess was the goddess of fertility and childbirth. She was considered to watch over and protect women in labor and new babies.

She was believed to be associated with the Hippopotamus.

Thot, the god of writing and wisdom. His physical appearance was portrayed in the form of a baboon or as a man with the head of an ibis. It is believed that he was the inventor of the language and served as a scribe and advisor for the gods. Thot was said to have the knowledge of magic and secrets that were unavailable to the other gods